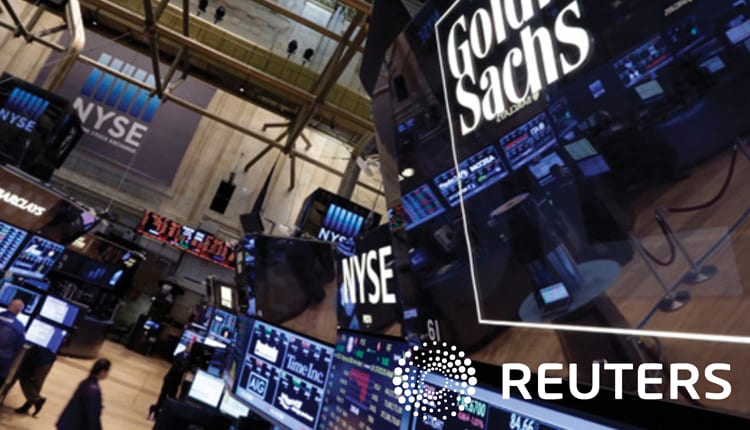 The bankers are the latest to leave Wall Street banks for Silicon Valley startups, where the lure of more flexible hours – and in some cases stock options and share grants – can be hard to resist. For tech companies, having bankers on staff can help smooth the path to an initial public offering and other capital raisings.

Uber, currently valued at around $51 billion, said in August that it expected an IPO within 18 to 24 months. It has already raised $7.4 billion from multiple financing rounds, and is the biggest so-called “unicorn” – the term for privately held tech startups worth $1 billion or more – that has yet to go public.

Goldman does not disclose attrition figures, but it has lost enough employees to startups, private equity firms, and other companies in recent years that it announced earlier this month a series of changes designed to help it retain more junior employees at the analyst and associate level, including promoting them faster. It has also set up a task force to help it retain mid-level employees who hold the vice president title.

Spokespeople for Goldman and Uber both declined to comment.The increasing attraction of other fields for Wall Street bankers underscores how increased regulation after the financial crisis has weighed on employees’ potential earnings from careers in the sector.

There is a lack of publicly available data documenting how many people have left the big banks, but there have been a series of high profile exits, including Ruth Porat, former chief financial officer at Morgan Stanley (MS.N), who earlier this year took a similar role at Google parent Alphabet Inc. (GOOGL.O), and Michael Evans, former vice chairman and head of Asia at Goldman, who became president of China e-commerce company Alibaba Group Holding (BABA.N) in August.

A vice president in Wall Street investment banking can get paid $500,000, including bonus, while a mid-level corporate development employee at a technology company like Uber might earn closer to $200,000, recruiters said. The banker’s salary will often fluctuate depending on how the deals and capital raising areas are doing in a particular year. Bankers may take pay cuts to move to Silicon Valley, but there is often the appeal of a better work-life balance and the opportunity to work at fast-growing private companies that can offer shares or stock options, and therefore the possibility of big IPO paydays for senior staff. Those gains can sometimes more than make up for the reduced salaries.

Some younger workers who would have been expected to head to Wall Street in the past are avoiding banks altogether. At Harvard Business School, for example, 20 percent of graduating students from the class of 2015 said they were taking jobs at technology companies, up from 11 percent in 2011, according to the school’s employment report.

While 31 percent of students said they were going to work for financial services companies, about three quarters of that group went into venture capital, private equity and leveraged buyout firms. The numbers going into investment banking and sales and trading, the traditional focus of firms like Goldman, halved to 5 percent, from 10 percent in 2011.

Banks may not like losing employees, but they would rather lose them to clients than to competitors, said Noah Schwarz, a senior recruiter at headhunters Korn Ferry. A banker that goes to a client is “viewed as a ‘good leaver,'” Schwarz said.

The ride service company often hires bankers for corporate development. They focus on plotting the company’s strategy and handling financial transactions including capital raising.Some of the bank’s employees would know Uber’s finances well as Goldman helped it to raise $1.6 billion by selling convertible securities to Goldman wealth management clients this year.

Former Goldman employees on the engineering side have also played key roles in creating the formulas that Uber uses to determine how much it should charge for rides at any given time based on demand, recruiters said.

Uber has relationships with a number of other Wall Street banks. They include Morgan Stanley, which was the lead arranger of a $2 billion line of credit for the company, also this year.

Uber is growing very rapidly, and now has about 5,000 employees, up from only about 550 at the beginning of 2014. The company has expanded to dozens of new cities in the past two years, and now spans 68 countries.

Chelsea Cooper worked at Goldman for four years before leaving the banking world behind during the financial crisis for a career in technology. She was hired at Uber in 2012 as general manager of the company’s United Kingdom operations, where she launched the service. For employees on the business side, “Uber really hired from two pools: from bankers or consultants,” said Cooper, who left Uber in 2013 and is now head of technology at recruiting firm Hired. Goldman ranks in the top 10 companies that Uber recruits from, ahead of even large technology firms like Twitter Inc (TWTR.N), Oracle Corp (ORCL.N) and Intel Corp (INTC.O), according to LinkedIn. Tech companies like Microsoft (MSFT.O) and Facebook (FB.O) are bigger sources for hiring than Goldman.

Other Silicon Valley companies have also been hiring former Goldman employees. The bank is one of the most sought-after for technology companies, who believe that Goldman screens and trains its employees rigorously, recruiters said. “If someone has made it through the Goldman Sachs process, you know they are a high-caliber hire,” said Dave Carvajal, founder and CEO of Dave Partners, a tech recruiting firm.

Goldman’s expertise in technology banking helps too. Its technology team, which is one of the bank’s largest investment banking groups, has advised technology companies on more merger deals than any other bank in the world so far this year, according to Thomson Reuters data.